The Process and Communication Team is authorized to spend up to $2000 from Team Reserves to hire an outside facilitator for our 2019 retreat.
Nominating Task Force Deadline Extension
​February 21, 2019
Posted Decision
We approved by consensus the following proposal:

Given the lack of response, the Nominating task force is requesting an extension to the Feb. 28 deadline until March 7, 5 pm.
2019 Steering Team Slate
​March 22, 2019
Posted Decision
We approved by consensus the following proposal:

The ST Nominating Task Force proposes the following members for the 2019 ST slate, all of whom served in the previous year: Julie Goodman, Mac Thomson, and Han Bishop, with Beth Walker serving as Treasurer. Additionally, the Nominating Task Force requests community approval for a 1-year exemption to the requirement for a minimum of 4 ST members given the lack of additional volunteers this year.
Revise Prospective Member Checklist to Remove Chat Requirement​
​May 23, 2019
Posted Decision
We approved by consensus the following proposal:

Revise the Prospective Member Checklist by removing requirement #4 in the Participation section having to do with subscribing to the chat.
Consideration of Including Pasture Lots in Phase 2 Development
June 17, 2019
Community Meeting
We voted to use the following Alternative Method Vote:
Due to the urgency of completing the County map amendment application, rather than using a unanimous vote, we will use a supermajority vote of 75% of the members present at the Community Meeting at which the decision is being made (June 17 or July 1 Community Meetings) to make decisions necessary to complete that application. We will make those decisions by July 1.

We will specifically be deciding on the number of lots to develop as part of the Phase 2 development in the pasture and near the cluster. Other decisions necessary to complete that application may also be made.

In this decision making, we will use a consensus process in which we welcome each person’s perspective and work together to find the best solution we’re capable of for the good of the community.

Following the Alternative Method Vote, we approved by a 75% super majority vote the following proposal (vote of 17 in favor and 1 abstained):
Phase 2 development will not include lots in the pasture. The plan for Phase 2 will continue to be 14 lots in a cluster to be located in the Outback or on HOA land, to be decided later with a community decision. The HOA may someday pursue developing pasture lots.
Revise Decision Making and Meetings Agreement to Address Reopening Decisions​
August 5, 2019
Posted Decision
We approved by consensus the following proposal:

Add a third way decisions can be opened so that the agreement is in alignment with what has become a community practice. The new section would read:

All decisions remain in force until they are replaced by another decision. A team may reconsider any of their previous decisions at any time. A community decision previously made is reconsidered only if:

Community Meeting
We approved by consensus the following proposal:

1) Replace the first paragraph with:
All decisions are made by a consensus of members whether in Community Meetings, Team Meetings, or by Posted Decision. (See Consensus Philosophy Guidelines.) The only exceptions are when we elect to use an alternative decision making method (see Alternative Method Vote below) or a fallback resolution process (see FALLBACK RESOLUTION PROCESS below).

2) In the "WORKING WITH TOPICS AND MAKING DECISIONS” section, replace the last sentence of the second paragraph with:
Each major concern is discussed until the person(s) holding the concern feels that the concern has been satisfactorily addressed, except in the case of a Fallback Resolution Process  (see FALLBACK RESOLUTION PROCESS below).

3) In the "WORKING WITH TOPICS AND MAKING DECISIONS” section, delete the fourth and fifth paragraphs (dealing with validity test).

4) Add the following section after the "WORKING WITH TOPICS AND MAKING DECISIONS” section:
FALLBACK RESOLUTION PROCESS
If one or more members red cards a proposal, the red card holder(s) is responsible for organizing meetings with the Topic Guide(s) who presented the proposal or their appointed representatives, and any other interested members in a series of solution-oriented, consensus-building meetings. The purpose of the meetings is to work through the concerns and mutually agree on a revised proposal that addresses the same problem as the original blocked proposal. These meetings must take place within 2 months. It is recommended that four meetings are held, if needed, to find resolution and create a revised proposal. 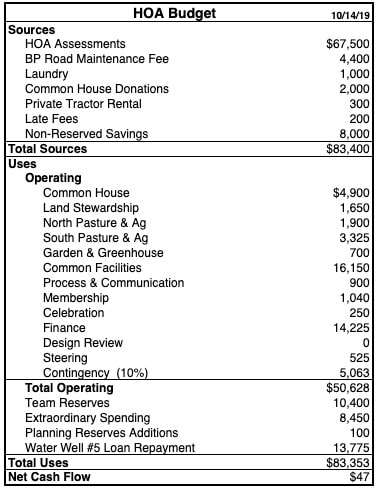 D)  PLANNING RESERVES
The Planning Reserve for CFT - Broadband Internet will be eliminated. We will make a one time extra funding of the following (in addition to their normal annual funding):
S-PAT - Tractor Replacement $1500
CFT - ET Bed Repair or Replacement $1825

We will create a new Team Reserve for the eventual replacement of the brush hog (and also add it to the list of assets that CFT is responsible for in the Teams agreement):
Reserve Cap: $4500
Estimated Useful Life: 15 years
Annual Funding: $300/yr